A NEW BOOK! (and an update on XML editors)

My latest book, Building PowerPoint Templates: Step by Step with the Experts, was released last October. (Get it here or here.) Co-author Julie Terberg and I spent the better part of a year working on it, and it’s exciting to see all our hard work finally come to fruition.

One of the chapters I did covers editing PowerPoint’s XML. I swear, that was the hardest chapter for me to write – in fact, I think I completely redid it at least three times! And of course, as so often happens, some of the information is already out of date.

Visual Studio Express is available, but unfortunately it also doesn’t support add-ins, so it won’t work either. So what’s a fledgling XML geek to do?

I recommend that you grab 7-Zip and set it up to use Visual Studio Express (2012 or 2010, it doesn’t matter) as its XML editor. Both are free. Install both, then use the following steps to set yourself up for easy XML editing.

2. Click the Editor tab, then the Browse button to navigate to the veexpress.exe file. For reference, mine’s in C:\Program Files (x86)\Microsoft Visual Studio 10.0\Common7\IDE\vbexpress.exe. Your path might be slightly different depending on your version of Windows and the edition of Visual Studio you installed. 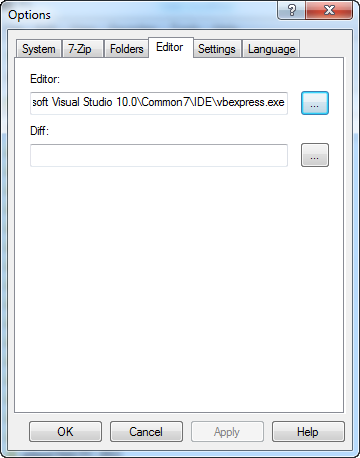 3. Select the PPTX or POTX (or other Office file) you want to edit and choose File | Open Inside. 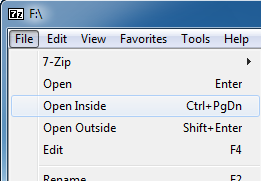 4. Now you’re inside the file and you can view the guts just as described in the XML editing chapter of the book.

5. Navigate to and select the XML file you wish to edit and choose File | Edit. This will open the XML file in Visual Studio for you to edit as described in the book.

6. When you close the XML file after editing, you’ll be prompted to save the file (in Visual Studio) and update the file in the archive (7-Zip). No need to use Windows Explorer to unzip the file and put it all back together again Humpty-Dumpty style, yay!