4 best practices for powerpoint handouts with send to word

PowerPoint handouts leave a lot to be desired. You can print slide thumbnails 3 per page. You can even print notes pages – which have one slide per page plus its notes. But if you want to print multiple slide thumbnails per page and include the speaker notes, you’re outta luck. Or are you?

Regardless of what it’s called and where you find it, the feature itself hasn’t changed much – if at all – over the years. When you click Create Handouts, you’ll see this dialog: 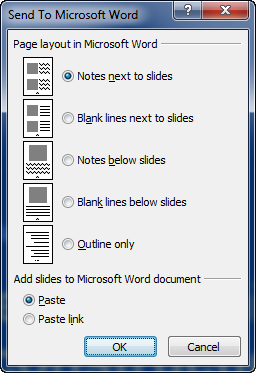 It’s pretty straightforward, and the icons are fairly accurate – that is, the first one gives you multiple small thumbnails with speaker notes beside them, the second is the same but with blank lines, the third is one slide with speaker notes below, and the fourth is one slide with blank lines instead of notes. The last option exports an outline of the text which is included in placeholders. (Text in manual textboxes, diagrams, other objects, etc., is not included in the outline.)

Below is a 2-page example of what the Notes next to slides option gives you in Word. You’ll get the slide number, a slide thumbnail and any speaker notes laid out in a table. You won’t see the table borders, though – I added them here so you can see the table structure more easily. 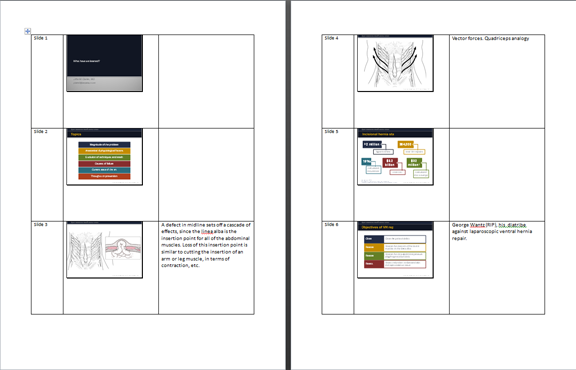 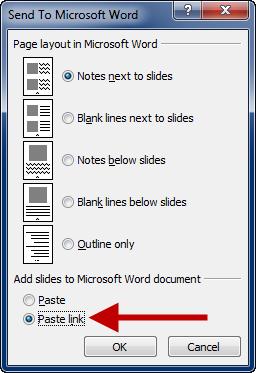 Well, when you choose plain ol’ Paste, Word creates an embedded OLE object for each thumbnail. This causes your Word file size to be HUGE compared to the PowerPoint file. For example, I had a 3.3MB file with 20 slides, and I Sent to Word using Paste. The resulting Word document was nearly 19MB!

Using the same PowerPoint file and choosing Paste Link instead, the resulting Word file is only 9.6MB – half the size of the file created using plain ol’ Paste.

So, best practice #1: Use Paste Link

Paste Link, on the other hand, creates linked slide thumbnails in the Word file. Double-click one (or right-click and choose Linked Slide Object | Edit Link), and it will open your original PowerPoint file. 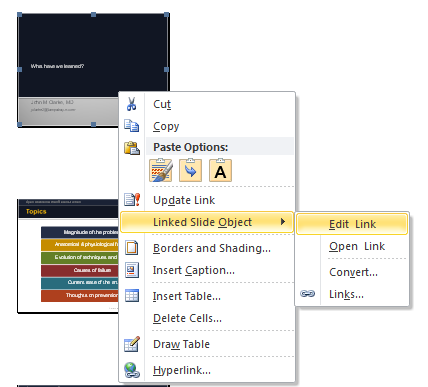 Let’s talk a minute about the edit links dialog in Word. Here’s what it looks like by default after using Paste Link with the Send to Word process. 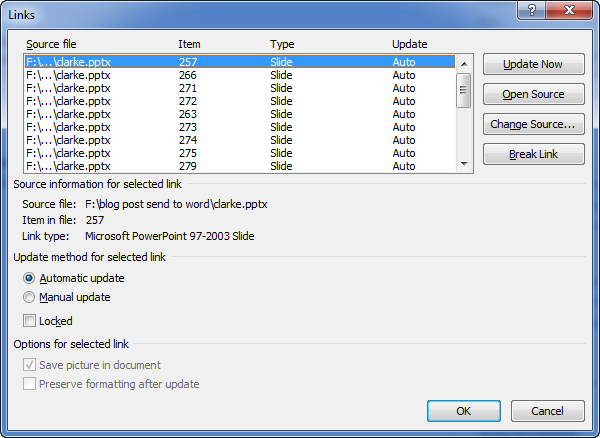 I personally don’t leave my links set to Auto. When I do, Word has a tendency to hang whenever it decides it needs to check for any slide updates. At the very least, I suggest you select all items in the slide list (you can press Shift and click the first and last items to select all) and change the links from Automatic update to Manual update.

And to be completely honest, I generally go all the way and remove the links altogether by selecting all items and clicking the Break Link button.

Best practice #2: Break the links (or at least set them to manual update)

I break the links because I think Word’s more responsive when I do (although that could be my imagination, sure) – and because there’s really not much reason to keep the handout file linked to PowerPoint. This is because, even though Microsoft says the Send to Word feature lets you “automatically update slides in the handout when the presentation changes,” this is practically useless (and completely misleading).

The only thing that updates if you make changes to the linked presentation is the content of slide thumbnails that are already there in the handout. That can be useful, sure, but I find it more problematic than not, so I break the links altogether and re-do the send if the presentation changes.

You might also notice that in the Edit Links dialog it says Link type: Microsoft PowerPoint 97-2003 Slide. See? I told you this feature hasn’t been updated in ages – and I promise you I’m working with a PPTX file created in PowerPoint 2010 for this exercise!

In Word, I usually resize the slide thumbnails and the column they’re housed in. I either resize or remove the slide number column. I add headers and footers to the Word pages, and sometimes I adjust the speaker notes.

If you’ve broken the links, you can resize a slide thumbnail in Word using the size options on the Picture tab and then run through the rest of the file selecting a thumbnail and hitting F4 to repeat the resize – so it takes just a couple of minutes to resize all the thumbnails, even on a large file. If you haven’t broken the links, you’re limited to dragging the corner of each and every thumbnail to resize it. (Much slower than hitting F4!)

Best practice #4: Think about the view

Oh, one other thing! Microsoft keeps breaking the ability to put your PowerPoint file into Grayscale (or Pure Black and White) View and send grayscale images to Word. Sometimes it works, sometimes it doesn’t. It works fine in PowerPoint 95, 97, 2000, 2007 and 2010: you get grayscale/black and white slide thumbnails. It does not work in PowerPoint 2002, 2003, 2007 or 2013: If you put your presentation into Grayscale View and Send to Word in these versions, you still get color slide thumbnails.

Yeah, I know I listed 2007 as both working and not working. As of January 2010, Send to Word in black and white did NOT work in PowerPoint 2007. But when I tested it today, it did. I suspect this was fixed in a service pack or hotfix or some such, but I don’t think it’s worth the time to track that down. If you’re smart, you’re not using PowerPoint 2007 any more anyway! (I have SP3 for Office 2007 installed, for what it’s worth.)

And finally, you must be in Normal (editing) View to Send to Word. PowerPoint won’t send if you’re in Slide Sorter View.